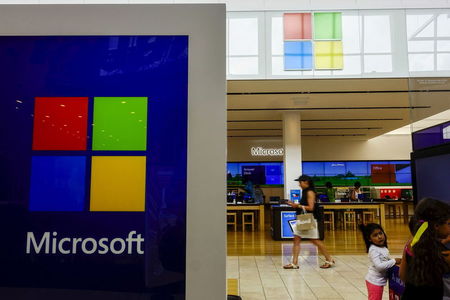 Investing.com — Microsoft shares are slumping this morning after the software giant reported its slowest sales growth in six years. Here are the 5 biggest earnings reports yesterday, all first covered on InvestingPro.

The key Intelligent Cloud revenue figure was up 24% year-on-year in constant currencies in the quarter, but Microsoft sees it edging up to around $21.85B in the current quarter, an implicit annualized growth rate of only 6.6%, according to Investing.com calculations. Analysts had expected around $22.14B.

was $2.02, ex-items, better than the consensus of $2.00. Revenue fell 3% year-over-year to $4.67B, compared to the consensus of $4.65B, reflecting weaker demand in all end markets with the exception of automotive.

Shares were off fractionally in the pre-market.

The company announced it will cut 2,500 jobs this year and take a restructuring charge of $75M – $100M in Q1, as demand for some of its core products weakens.

Verizon Communications (NYSE:) reported its Q4 results, with of $1.19 coming in line with expectations. Revenue was $35.3B, compared to the consensus of $35.11B.

Geoffrey Smith contributed to this report.

If you’re interested in upgrading your search for new investing ideas, check out InvestingPro.