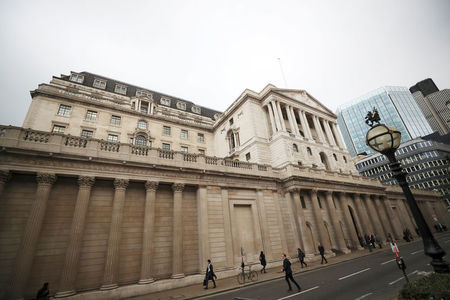 Investing.com — The Bank of England raised its key by 0.5 percent to 2.25%, a 14-year high, as U.K. continued to race ahead of its target despite an economic slowdown.

The Bank also confirmed that it will start active sales of U.K. government bonds in October, whittling down the portfolio it amassed during years of ‘quantitative easing’.

The Bank pointed to a slight weakening of the labor market and lower-than-expected inflation in traded goods since its last meeting, in explaining why it had slightly slowed the pace of its tightening of monetary policy.

The dollar lost around half a cent against the on the news to trade below $1.13, while the yield on the benchmark government bond rose by 5 basis points to 3.37%, touching the 11-year high that it reached on Wednesday.

Three members of the nine-strong Monetary Policy Committee voted for a bigger hike of 75 basis points, but the MPC’s newest member, Swati Dhingra voted to raise rates by only 25 basis points.