After a busy week for central banks, nothing has changed to alter my bearish outlook on the stock markets. I continue to expect to see new lows on the year on the major European and US indices. The only needs to drop another 4%-5% to get there.

Admittedly, the markets do look a little bit ‘oversold’ following the sharp moves this week, so a bit of a rebound may be warranted. But we are likely to see the bears continue to defend their ground amid a bearish macro backdrop.

The this week broke another support area around 11,750. The area around this level is now the most important short-term resistance zone that they need to defend. For as long as the index holds below here, the path of least resistance would remain to the downside towards the June low at 11,036. 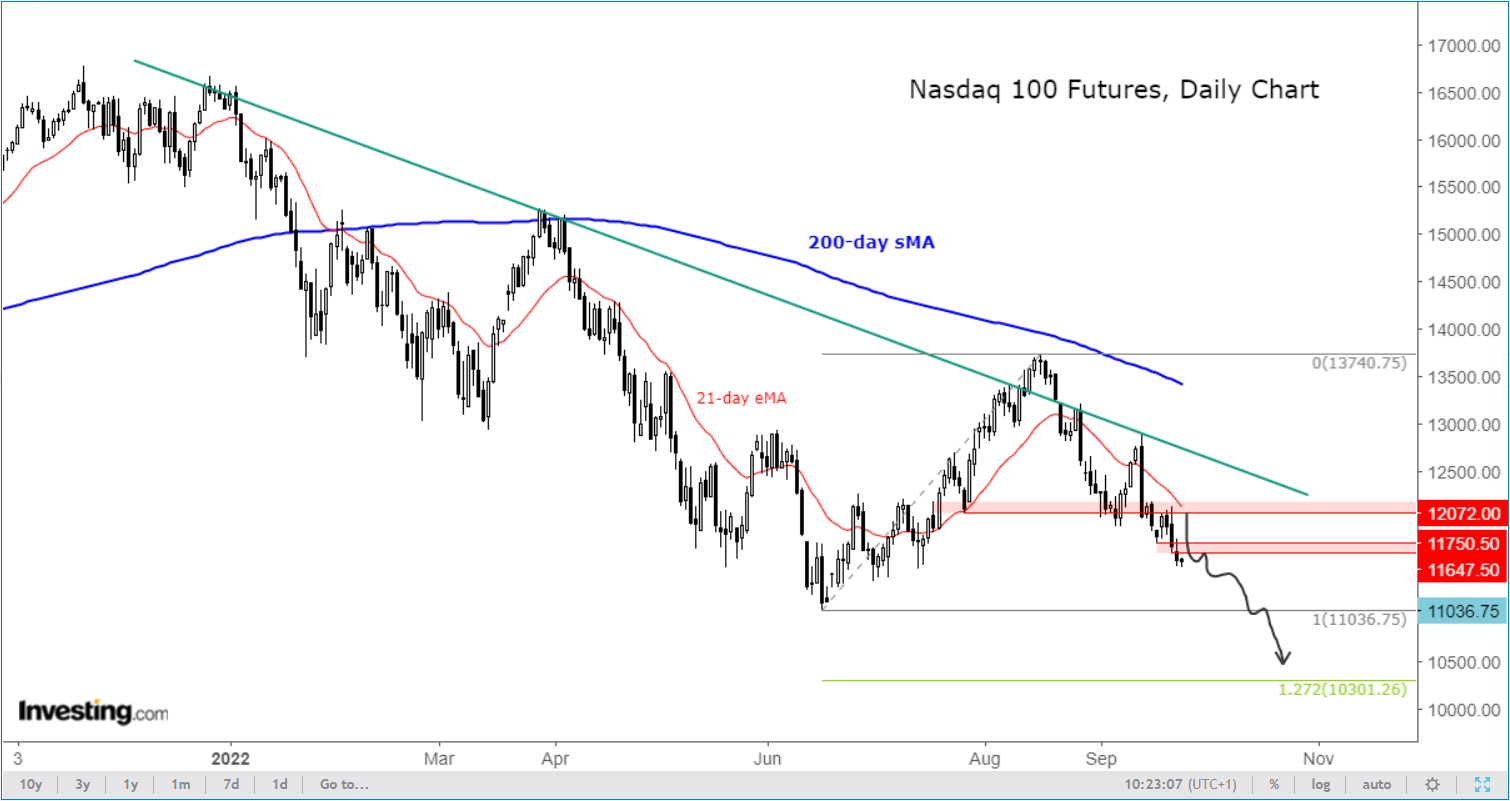 The lower lows and lower highs, as well as the downwardly sloping 21- and 200-day moving averages all objectively tell us what we need to know. So, there’s no doubt that the trend is bearish right now.

For now, and as I have been banging on about it, stocks remain rooted in a bearish trend. This week saw investors dump stocks hurriedly along with the , and nearly all other foreign currencies, as they watched yields continue to rise following a flurry of central bank action.

Among them, the US Federal Reserve announced a 75 basis point rate hike and signaled that it would continue to raise rates aggressively until inflation comes back under control. In response, bonds broke down, causing the yields on bonds with all maturities to move higher. The US bond yield broke above 3.7%, making low- and zero-yielding assets such as some technology stocks and even less appealing for yield seekers.

In addition to mounting concerns about rising interest rates and inflation, the energy crisis is continuing to weigh heavily on the European economy as the Russian invasion of Ukraine drags on after Putin announced that military reservists will be sent to Ukraine as part of a “partial mobilization” of his forces. Today’s soft European PMI numbers underscore these concerns. Furthermore, there are growing concerns about the health of the Chinese economy, which has been held back by the government’s zero covid policy and global economic weakness amid surging price pressures.

Given these macro concerns and the technical outlook, I wouldn’t bother looking to buy the dips until the charts tell us otherwise. For traders shorting the indices, it has been a good year. This trend is likely to continue until something changes fundamentally.

Disclaimer: The author currently does not own any of the instruments mentioned in this article.