Netflix (NASDAQ:) is down almost 60% year to date, making it the second worst performer after Meta Platforms (NASDAQ:) among big tech.

As opposed to Meta, whose advertising revenue has declined, Netflix ad revenues will increase as it enters the advertising business. As Oppenheimer outlined in a recent report: “Netflix is uniquely positioned to aggregate large audiences and control the timing of series launches for top-tier advertisers…” Jason Helfstein, analyst at Oppenheimer has a $325 target, potential rise of $82.15, or 34%.

Another believer is Citi analyst, Jason Bazinet. He sees numerous techniques to maximize revenues, including ad tiers, bundling, and windowing despite pessimism regarding subscription video on demand stocks. Although slightly more conservative than Helfstine, Bazinet raised his price target on Netflix from $275 to $305.

Let’s see how these fundamental-based expectations jive with the technicals. 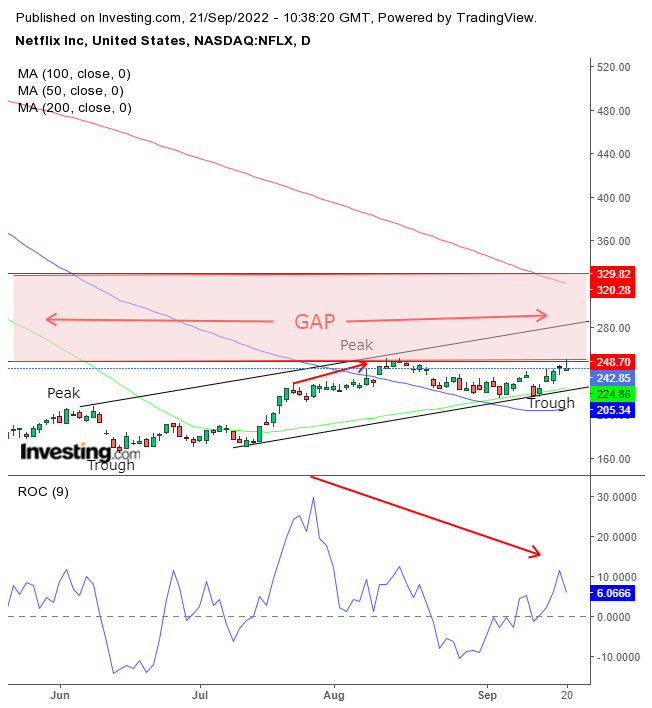 The price appears to be uptrending. It trades within a rising channel, posting an increasing series of peaks and troughs. The 50 DMA supported the last low and crossed the 100 DMA simultaneously.

However, it’s not so simple.

Monday’s trading formed a hanging man. Traders entering long positions at the open or close (and lots of trading occurs in those times) are now left “hanging” with the fears that the stock will fall again.

Also, given that a long under shadow demonstrates a bearish counterattack, it’s necessary to receive confirmation of a close the following day below the hanging man’s real body (price between open and close, disregarding wicks, representing intraday prices), where much of the buying has been taking place.

Moreover, if the hanging man develops at a significant high, it could make them even more nervous. The hanging man created below the August high, the highest since Netflix plunged on shocking subscriber loss on Apr. 20. In other words, traders stung by that drop will remember these price levels, which could increase selling pressure. Indeed, on the following day, yesterday, the price not only closed below the hanging man’s real body but did so while forming a shooting star, a second bearish candle, increasing the chance for a double-top.

The Rate of Change registered a negative divergence, showing momentum supported the rally between July and August. Finally, bulls have to contend with the psychological impact of the 30% falling gap, which is very likely to create significant resistance. Note how the 200 daily moving average (DMA) just fell below the top of that gap, adding its weight to the opposition. 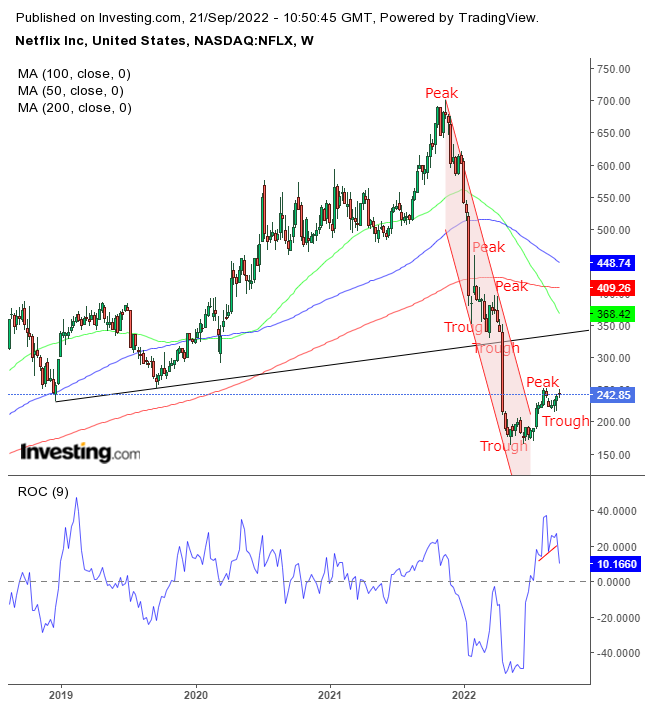 While the lagging MACD and the momentum-based RSI are still positive, the more sensitive momentum indicator, the ROC, topped out. Finally, the 50-week MA (WMA) cut through a falling 200 DMA, trigging the worst possible Death Cross: on the weekly scale and even while the 200 DMA was falling. The last time Netflix saw a weekly death cross was in mid-2012, but it wasn’t with a falling 200 DMA.

Still, the price broke out of its falling channel, and even if the current trajectory is lower, there is room for a short to medium-term rise, which could even agree with the fundamental targets outlined earlier. If the price makes a new high, it will put the long-term trend back up, though it will have to contend with the broken trendline above and the weekly Death Cross amid a falling 200 DMA.

Conservative traders should wait before considering along for the price to make a new high, establishing a long-term uptrend, and then buying the following accumulation.

Moderate traders could risk a long position after the price bottoms out from the presumed current decline.

Aggressive traders could short, counting on the hanging man-shooting star duet, at the highest level since the Apr. 20 devastation, forming a massive falling gap.

Disclosure: At the time of publication the author had no positions in the stocks mentioned.