GoFundMe campaigns are raising money to help older Walmart workers retire. ‘This is not a feel-good story, this is about the failure of our retirement system.’ 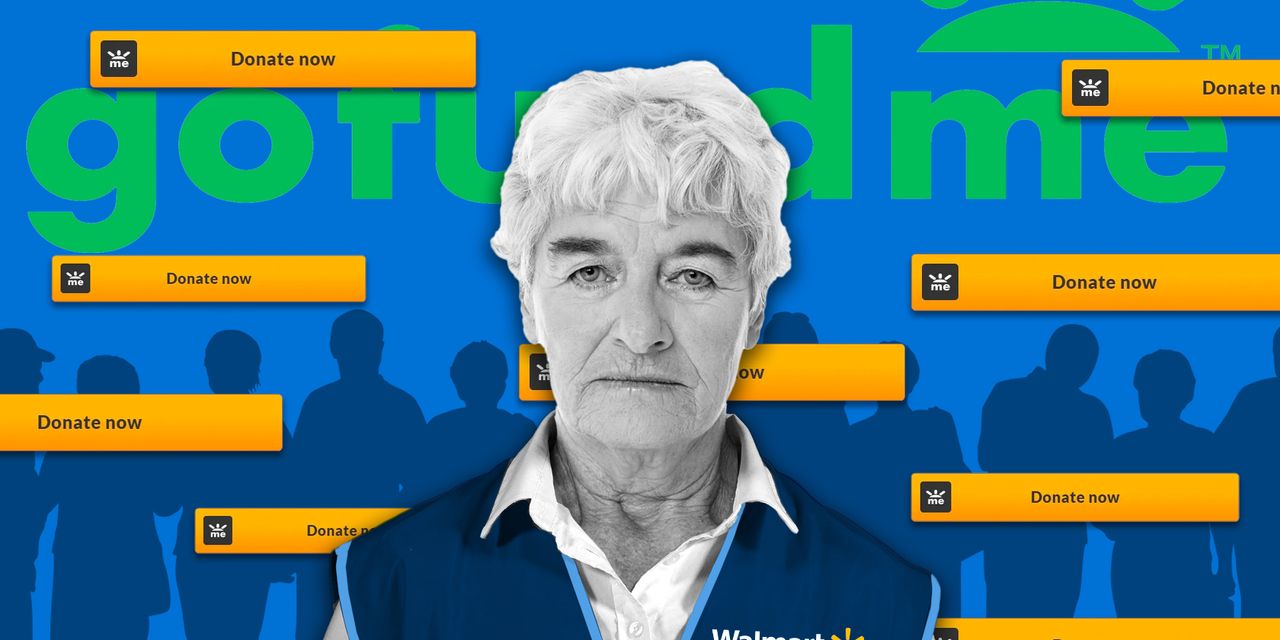 GoFundMe campaigns have been raising piles of cash for older Walmart workers who want to retire — but the heartwarming stories about sudden windfalls mask a dark reality about economic security and growing old in America, say retirement experts.

“This is not a feel-good story, this is about the failure of our retirement system,” said Teresa Ghilarducci, a labor economist at the New School, about the spate of GoFundMe campaigns supporting older Walmart workers.

workers have appeared on GoFundMe over the years, but they started popping up more frequently last summer and gained momentum during the holidays, a GoFundMe spokeswoman told MarketWatch. The campaigns are typically started by someone who has either seen a baby-boomer-or-older employee working at their local Walmart, or someone who has an older loved one working at the store. The appeals usually feature a photo of the worker in their store vest and name tag. Some describe situations where people in their 80s and 90s are working because they need to pay off medical bills. Others simply say they’re trying to give an older person who’s been working most of their life some peace of mind and relaxation. (Walmart did not respond to requests for comment for this story.)

After TikTok videos encouraging people to donate racked up millions of views, a few of the Walmart workers hit the GoFundMe equivalent of a winning lottery ticket: an 82-year-old named Butch was able to retire after a GoFundMe attracted more than $166,000 in donations. A campaign for Carmen, another 82-year-old in Arizona, brought in more than $136,000 and was covered on “Good Morning America.”

Around the holidays, GoFundMe highlighted several fundraisers helping older workers retire. They weren’t all Walmart workers; older employees from McDonald’s, Target, Burger King and the U.S. Postal Service also got support from GoFundMe campaigns. “Our community has been so inspired by the stories of strangers helping elderly workers that they have started other fundraisers to help people in their neighborhoods,” a GoFundMe spokeswoman said. “We’ve seen fundraisers started in Maryland, Florida, Texas and around the country. Shows the power of how one fundraiser can spark others in a positive way.”

“ ‘I figure that we have 3.9 million people in America now who are working over the age of 70 who need GoFundMe accounts. And that’s just not a practical solution to this problem.’”

The campaigns to help workers retire represent a tiny fraction of activity on GoFundMe, which has raised more than $17 billion since its 2010 launch and is a go-to for people who need help covering funeral costs, medical bills and other unexpected expenses. At least 20 GoFundMe campaigns for Walmart workers have been started over the past few months; most have fallen far short of their fundraising goal. Several have $0 in donations, a search of the site shows.

More troubling, though, is the situation in the real world, where the odds of an older lower-wage worker having a well-funded retirement account are slim, experts told MarketWatch. About half the American workforce does not have access to a 401(k) retirement account at work, but working at an employer that offers one does not necessarily guarantee retirement security, said John Scott, the retirement savings project director at Pew Charitable Trusts.

Part-time workers may not work enough hours to qualify for a 401(k), and their earnings may be so low that it’s nearly impossible to save adequately for retirement, he said. “Even when they’re participating, they’re not accumulating as many assets as workers in better paid jobs,” Scott told MarketWatch.

Ghilarducci, who researches the retirement crisis at the New School’s Retirement Equity Lab, estimates that about 75% of U.S. workers over 70 are working because they don’t have enough money to retire, and 25% are working because they want to. “I figure that we have 3.9 million people in America now who are working over the age of 70 who need GoFundMe accounts,” Ghilarducci said. “And that’s just not a practical solution to this problem.” People working at this age and older are sometimes doing so because their Social Security payments — which average about $1,100 a month — don’t go far enough, Ghilarducci said.

Meanwhile, any retirement savings they built up earlier in life may have been drained by a financial setback like a divorce, a medical calamity, or children in need financial help, she added. The median retirement savings for workers aged 55 to 65 is $60,000, according to her research; a June 2022 Vanguard report showed the median 401(k) account balance overall was $35,000. “We as a nation have just not come to terms with that math,” she said.

One positive aspect of the GoFundMe trend aimed at older workers, Ghilarducci says, is that it has put a spotlight on the types of jobs many older workers have, and runs counter to unrealistic fantasies about the rare “100-year-old yoga teacher,” she said. Many older workers are working as janitors, home health aides, or in Amazon warehouses, where they’re often unseen by the general public (and someone who might want to start a GoFundMe account on their behalf), she noted. “Some of the older workers most in need are in low-paid jobs that are invisible to us,” she said.

One of the Walmart workers hoping for a GoFundMe-financed retirement is Gail Neal, a nearly 72-year-old who lives in White House, Tenn. She’s lost two toes to diabetes, but still climbs ladders to stock shelves at the Walmart where she’s worked for about 15 years, her daughter, Donna Stroud, told MarketWatch. The family recently posted a TikTok video showing Neal at work with the hope of attracting more donations. Their campaign had raised $775 toward its $20,000 goal as of Jan 25. Neal has health insurance through her job, but does not have a 401(k) account. (Walmart offers a 401(k) plan to employees, with an up-to-6% match that kicks in after one year and one month of employment, according to its employee benefits website.) Stroud said she wasn’t sure how much her mom makes at her Walmart job. The company announced this week that it’s raising the minimum wage for store jobs to $14 an hour starting in March. Neal continues to work in part because she needs to pay off about $11,000 she owes on a car loan and has medical debt, Stroud said. Despite her health problems, Neal says she can’t take time off to go to doctor’s appointments because she doesn’t have enough paid time off, Stroud said.

“I’m in constant worry,” Stroud said of her mom’s declining health. She described her mother as a hard worker who isn’t planning on a luxurious retirement. “She’s at a point now where medically, she needs to stop working,” Stroud said.

‘It doesn’t have to be this way’

Some policy changes could help improve the retirement situation for older low-wage workers, and some are already under way. About a dozen states now offer state-sponsored retirement accounts that can help fill in the gaps in retirement savings, Scott said, and a Saver’s Credit in recently passed retirement legislation should help lower-wage workers accumulate more savings.

Another step that would help workers build savings would be for companies to offer a “safe harbor” 401(k) plan, which essentially means that companies automatically contribute to workers’ retirement accounts, said Ellen G. Frank-Miller, founder and CEO of the Workforce & Organizational Research Center, a social enterprise that works to improve the quality of low-wage jobs and company outcomes. These plans are more expensive for companies to offer, but they help companies’ bottom lines in the long run, because that sort of useful benefit leads to higher employee satisfaction, which leads to less turnover, Frank-Miller said.

She called the fundraisers to help older workers retire “incredibly sad,” but noted, “It doesn’t have to be this way. It’s the result of intentional policy choices, both public policy and employer policies. Who is getting hurt the most? It’s lower level workers in lower level jobs who are mostly women and people of color and that’s not the society we want to live in.”