Is it feasible that Argentina joins the BRICS? 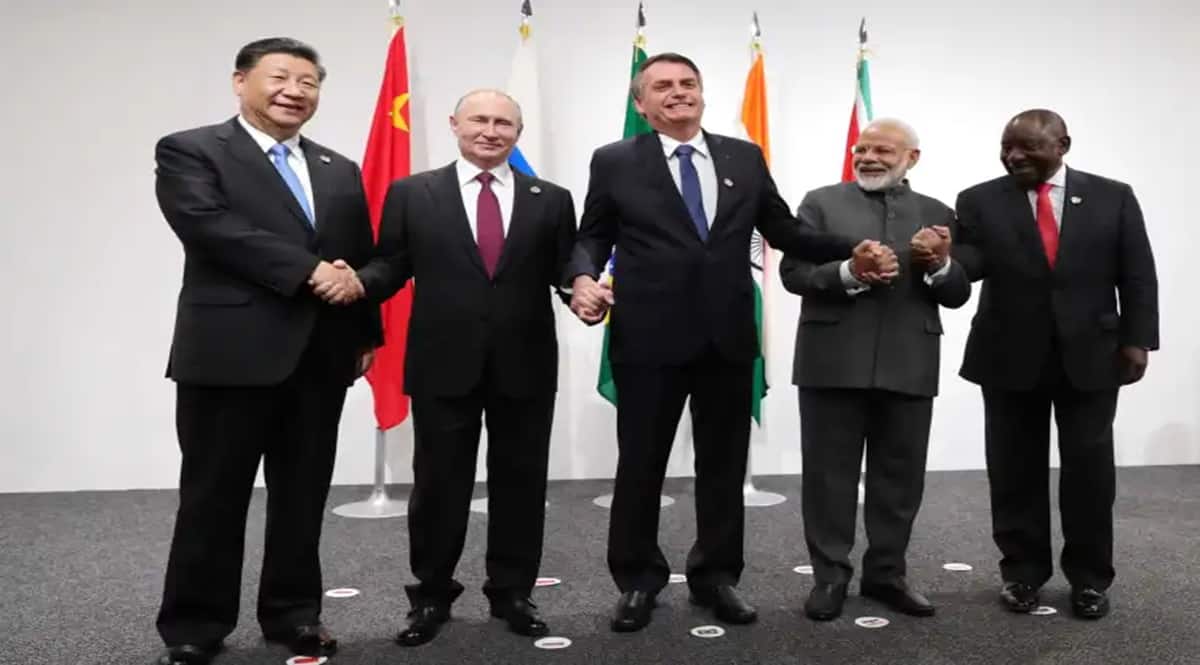 Argentina’s possible accession to the BRICS has been on the table for more than a decade, but there has never been any serious attempt until now. Xi Jinping’s invitation to Alberto Fernández to participate in the next summit to be held virtually with China as host, renews the debate regarding this possibility, which still seems remote.

After the visit of current President Alberto Fernandez to Russia (prior to the invasion of Ukraine) and China (in the context of the Winter Olympic Games) at the beginning of the year and of Foreign Minister Santiago Cafiero to India, this idea has been revived by the Argentine government, which has garnered some distant support among BRICS members.

It is not clear how possible a formal incorporation would be and what sense it would make in the current global context with Russia actively invading Ukraine, what is certain is that Cafiero participated in the virtual meeting of BRICS Foreign Ministers and Fernandez was invited to the presidents summit. This is not the first participation of an Argentine president in a BRICS meeting: Mauricio Macri had been present in South Africa 4 years ago and Cristina Fernandez in Fortaleza, Brazil, 8 years ago, following an invitation from Putin.

“Beyond the invitation received by Argentina from China, I do not see the incorporation as a full member of the BRICS as feasible, because it would break the founding spirit of the bloc of having as representatives the most important emerging countries of each continent”, says the Director of the Sino-Argentine Observatory, Patricio Giusto.

The current Argentine government has had an erratic foreign policy that does not make its position clear in several geopolitical aspects, that is why it is relevant to review the state of relations with BRICS countries and reflect on the sense of such a possible incorporation to the bloc.

Relations between Argentina and China

China is today Argentina’s main trading partner outside South America. Since Néstor Kirchner came to power, China has taken on an unprecedented relevance in trade relations for the recent history of the South American country. In 2004, during Hu Jintao’s visit to Buenos Aires, the two leaders signed a strategic partnership that later expanded with the beginning of Cristina Fernández de Kirchner’s first term and even continued with the arrival of the political opponent Mauricio Macri to the presidency, with commodity exports and public works as central axes.

Despite the multimillionaire investment announcements and several failed projects, Chinese state-owned companies in Argentina have carried out few public works through government-to-government loans with sovereign guarantees: the renovation of the Belgrano Cargas Railway and the Cauchari Solar Park are perhaps the most successful projects, in addition to some investments especially in sectors such as mining and renewable energy.

As regards BRICS, there have been comments from Chinese Foreign Ministry officials in 2014 regarding a possible Argentine membership, but no more than that. Xi Jinping’s current invitation to Alberto Fernandez can be seen as a return of kindness for having attended the inauguration of the Olympic Games, where, in addition, the Argentine President sealed the adhesion to the Belt and Road Initiative.

However, there have been some short-circuits in the relationship that raises an alarm regarding Argentina’s possible inclusion in the BRICS.

In fact, in a speech made at the Central Economic Work Conference in December 2021, Xi Jinping negatively analyzes certain social policies that fit the model taken by the Argentine government: “Some Latin American countries in the past have engaged in populism, and welfare in these countries has raised a group of “lazy people” with unearned incomes”. The Chinese leader continues: “Welfare-ism that exceeds one’s ability is unsustainable, and it will inevitably bring about serious economic and political problems”. Will the Chinese government seek to deepen economic relations with a country it  considers in this way? Will it prioritize the Asian giant’s need for raw materials and minerals?

As if this were not enough, a few weeks ago, during an official trip to Europe, Alberto Fernández declared on the German channel DW that he was “an Argentine Europeanist” and stated that: “China is a great power but it does not have strong cultural ties with Latin America, it has no history with Latin America”. This is not a positive sign for a relationship that Argentina is supposed to seek to consolidate and deepen.

Brazil and Argentina, neighbors and partners, but not friends

After the departure of Lula, and the ideological shift that it entailed, relations between Brazil and Argentina (under Peronism) have not been the best. Jair Bolsonaro and Alberto Fernández seem to be opposites, by style, thought and decisions.

It is not a minor fact that Argentina and Brazil are competitors in exports of certain products, especially soybeans, beef and other commodities. Argentina’s presence in the BRICS could undermine Brazil’s position by adding not only another country from the same continent, which is part of the same bloc as Mercosur, but also a commercial competitor in the main agro-industrial markets, China and India among them.

Precisely, one of the great disputes in force between Argentina and Brazil is regarding the opening and flexibilization of Mercosur (where Uruguay has a very clear position that is not fully corresponded by any of the two big countries of the bloc), despite the fact that they have reached an agreement on the common external tariff (CET) of the customs union.

Perhaps because of these issues, the person who spoke in favor of Argentina’s inclusion is Paulo Guedes, Brazil’s current Minister of Economy. Of course, Guedes was not referring to the BRICS per se, but to the New Development Bank (NDB), the bloc’s financial institution based in China, of which Uruguay, for example, is already a member.

“The proposal made by Brazil for Argentina to join the NDB constitutes a new financing channel for the development of infrastructure and opens a window of opportunity to obtain financing for works that increase export capacity, mainly in energy, in an adverse global context for access to credit”, says Segio Skobalski, PhD in International Relations and expert in strategic knowledge of global affairs.

India opens as a new opportunity for Argentina

The Foreign Minister of the Argentine Republic, Santiago Cafiero, was received on his latest tour of India by Prime Minister Narendra Modi and his counterpart Subrahmanyam Jaishankar.

Cafiero also participated in the Raisina Dialogue, where Jaishankar highlighted the growth of business with Latin America and with Argentina in particular, giving as an example soybean oil imports.

India is Argentina’s fourth largest trading partner and the fourth largest destination of Argentina’s exports. Certain Argentine agribusiness sectors have been stressing the importance of diversifying markets and not depending on China for a large portion of exports: due to the remote but possible alignment of Xi with Putin that may affect trade and the reprimarization that trading with China implies, which is not so marked with countries such as India or Vietnam.

It is not minor that India’s Foreign Minister highlights soybean oil imports from Argentina, China being the main buyer of soybeans worldwide. Both India and China require products that Argentina exports, as does Brazil, but is there room for this trade competition within the BRICS?

At the same time, it is also important to analyze for both countries the focus of their strategic partnership in this multipolar world and within the framework of Argentina’s relations with China.

As Hari Seshasayee, a specialist in India-Latin America relations and Global Fellow at the Woodrow Wilson Center, says: “In terms of global investment, trade or loans, China’s presence in Latin America is far ahead of India’s”.

But the Argentina-India relationship is growing and the Modi government’s recent moves to eliminate import tariffs on oils can benefit and grow this bilateral link.

Seshasayee is not very clear about the way forward for BRICS: “Within the group there are two countries, India and China, which currently have an unresolved border conflict”. And he says: “Russia’s position has become much more complex because of the war in Ukraine. I don’t know what actions the BRICS could take during these geopolitical tensions, and whether they could reach an agreement among all the members. If Argentina is really interested in joining the BRICS, perhaps it would be better for them to wait for a better time.”

The reality is that Indian officials have not made a clear statement regarding the possibility of Argentina’s membership, and, as Skobalski reminds us, “Argentina’s formal incorporation into the BRICS requires full consensus of all members as well as a complex administrative and diplomatic process.”

Russia and the BRICS question mark

The relationship of the different Argentine governments with Vladimir Putin has been quite close for a decade. Following the invitation to participate in the BRICS summit in 2014, Cristina Fernández de Kirchner visited the Kremlin and signed some twenty agreements with Putin on investment and trade, and even nuclear energy.

In 2018, it was Mauricio Macri’s turn to visit Moscow. The president also signed some agreements with Putin, including one for joint uranium exploration and production.

Already in 2022, Alberto Fernandez visited the Kremlin. Fernandez had the bad timing to offer Putin that Argentina should be “Russia’s gateway to Latin America”, just weeks before the beginning of the Russian invasion of Ukraine, of which Argentina’s foreign policy took a somewhat vague position.

What would Argentina gain from this possible alliance?

It is difficult to decipher what would be the relevance for Argentina of joining the BRICS with the current geopolitical situation and what that would imply in terms of relations with the United States and Europe.

“Argentina would not gain anything substantial, it would begin to participate in discussions at the highest level with these countries, but it is something it already has in the G20; on the issue of food security, Argentina has things to contribute,” says Giusto.”, says Giusto. And continues: “not in terms of economic benefits either, that goes more for bilateral ties with the members.”

As Skobalski rightly explains: “after Russia’s invasion of Ukraine, the US promotes the economic and political isolation of Russia with sanctions and seeks to exclude it from the G20”. This could affect Argentina’s position prior to the G20 leaders’ meeting in Indonesia at the end of the year.

Does Argentina need to enhance its already complex geopolitical position? Does BRICS need a Spanish-speaking member? Does BRICS need another full member in South America? Does Brazil want to further pave the way for Argentina in markets where they are competitors?

If I had to predict, I would say that “BRICSA” only exists in the dreams of certain Argentine government officials and will never see the light of day. But if we were told 30 months ago that there was going to be a world pandemic and a war in Europe, we would not have believed it either.

(Author is a consultant specializing in infrastructure, energy, and financing projects. He is co-founder of ReporteAsia.com, the first Spanish-language media that reports and analyzes Asia’s economy, geopolitics, and corporations. This article was first published in Spanish by ReporteAsia. Views expressed are personal and do not reflect the official position or policy of Financial Express Online).