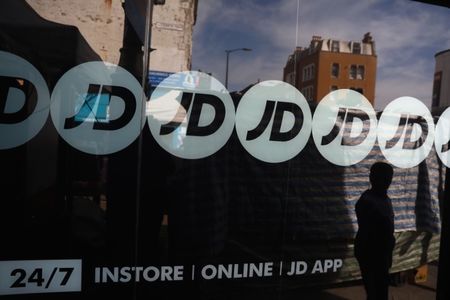 Investing.com — Shares in JD Sports Fashion (LON:) opened lower on Thursday after the sportswear retailer a drop in profit in the six months through July and struck a cautious note as it looked forward to the coming holiday season.

“Whilst the overall performance continues to be encouraging and the result for the half year was at the upper end of the Board’s expectations, it must also be recognised that the most material trading periods lie ahead,” chairman Andrew Higginson said in a statement. “Given the widespread macro-economic uncertainty, inflationary pressures and the potential for further disruption to the supply chain with industrial action a continuing risk in many markets, it is inevitable that we remain cautious about trading through the remainder of the second half.”

He noted, however, that the second half had started solidly, with sales up around 8% from year-earlier levels in the first six weeks of the period. The company was confident enough to reinstate its interim dividend at a level of 13 pence a share after two years of cash conservation during the pandemic. It expects full-year profit before tax and one-off items to match last year’s record performance.

JD Sports has had a volatile couple of years, with the pandemic causing first a slump in sales by closing its stores, then a surge as stimulus payments in the U.S., in particular, drove a boom in discretionary spending by consumers.

The fading of that boom, along with some serious supply chain issues, mean that profit at the North American arm nearly halved to 130 million pounds in the first half, although the company said that trading had improved as its logistics problems eased – a trend that has continued into the second half. Gross margin in the U.S. was roughly unchanged.

The outlook – relatively upbeat for a U.K.-based retailer – still wasn’t enough for JD Sports shares to escape the general negativity in the wake of the Federal Reserve’s latest hike on Wednesday. The stock was down 4.6% at a three-week low.