(Bloomberg) — The Federal Reserve’s preferred inflation gauges probably cooled in December to the slowest paces in more than a year, reinforcing a step down in the pace of interest-rate hikes but likely not enough for officials to discuss a pause.

Economists project a 5% annual increase in the personal consumption expenditures price index due Friday, and a 4.4% rise in the core metric, which excludes food and energy. Both would be the smallest advances since late 2021, and estimates for monthly changes also point to moderation compared with earlier last year.

Such figures would be consistent with forecasts that the Fed will further dial back the pace of interest-rate hikes to a quarter-point move at the conclusion of their two-day meeting on Feb. 1. But inflation remains well above their 2% goal and a still-tight labor market risks keeping it elevated.

“Their reaction function seems to have baked in slowing down interest-rate increases to a pace of 25 basis points per meeting going forward,” said Blerina Uruci, chief US economist at T. Rowe Price Associates. “The PCE number should not change that path much especially as it is coming at the back of a few months of cooler inflation data.”

Economists will also be watching the government’s initial estimate of fourth-quarter gross domestic product on Thursday, which also includes PCE price and other inflation metrics.

Fed officials last month boosted their core PCE estimate to end 2022 around 4.8%, up from a 4.5% projection in September. For that to materialize, the December figure would have to rise 0.38% month-over-month, compared to the median estimate of 0.3%, according to Bloomberg calculations.

Those assumptions have supported the Fed’s reasoning that interest rates will peak around 5.1% and stay there through 2023 — a prediction many economists and investors doubt will come to fruition. Another closely watched inflation gauge, the consumer price index, has been decelerating for months, and wage pressures are easing.

Policymakers acknowledge the progress, but contend that their work is far from over. Chair Jerome Powell and his colleagues are particularly concerned with inflation in the service sector excluding energy and housing — ranging from health care to getting a haircut — as wages are a big cost for these businesses.

“Even with the recent moderation, inflation remains high, and policy will need to be sufficiently restrictive for some time to make sure inflation returns to 2% on a sustained basis,” Fed Vice Chair Lael Brainard said last week.

Walmart (NYSE:) Inc., the largest private-sector employer in the US, said this week that it’s raising starting wages by 17% against a backdrop of high inflation and stiff competition for labor. Depending on the location, initial pay for new workers can range as high as $19.

“We think the Fed is justly skeptical of the view that the inflation threat is past. Core PCE excluding housing rents – the inflation measure the Fed watches most closely, according to Powell – is hovering around 4% and has shown few signs of moderation (in contrast to the analogous CPI measure).”

Economists are concerned that the Fed, partly due to basing policy on inflation forecasts that are too pessimistic, will hike rates so high — or keep them elevated for an extended period — to the point that it tips the US into recession. The upcoming GDP report is expected to show the economy grew at a slower pace at the end of the year, but still supported by robust consumer spending on services.

Beyond that, the outlook is cloudier. Forecasters see GDP contracting in the second and third quarters as spending stagnates, business investment wanes and industrial production weakens, according to a Bloomberg survey of economists conducted earlier this month. That puts the odds of a recession over the next year at 65%.

Inflation is notoriously difficult to predict, and the Fed has been caught off guard in the past. Critics, and even several officials themselves, say the central bank moved too slowly with its hiking campaign last year, and messaging is key to keep market expectations in check.

“They don’t want to sound dovish because they don’t want financial conditions to ease too much so they need to keep up the tougher talk, but it’s also real because inflation could move back up,” said Luke Tilley, chief economist at Wilmington Trust Corp., who previously worked at the Philadelphia Fed.

So while the PCE data will likely reinforce that inflation is cooling, it’s too soon for the Fed to declare victory. Policymakers will insist they need to see more evidence that price gains are in fact ebbing before discussing pausing rate hikes, particularly in wage measures like the employment cost index and average hourly earnings to be released next week.

“If you want to prevent the forest fire, you need to make sure the embers of the campfire are fully extinguished. We are not there yet,” said Carl Riccadonna, chief US economist at BNP Paribas (OTC:). “So they may want to move forward more slowly, but they still want to continue hiking.” 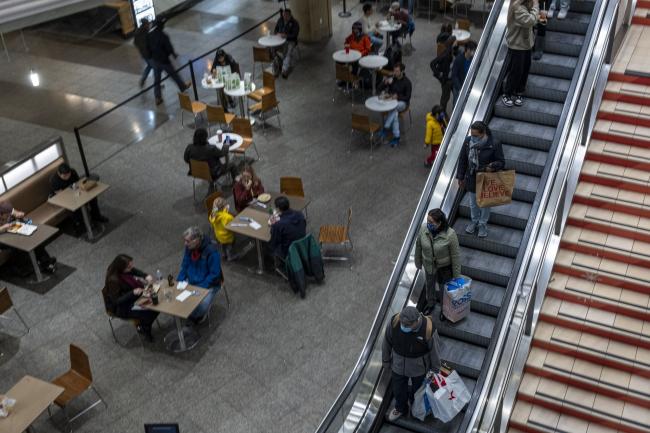