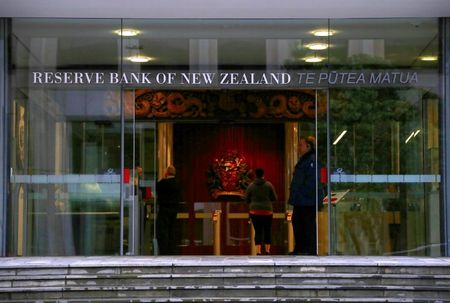 Investing.com– The Reserve Bank of New Zealand hiked interest rates by a record 75 basis points on Wednesday, and warned of a potential economic downturn in the near-term as it continues to move against inflation.

The central bank raised its by 75 bps to 4.25%- their highest since the 2008 financial crisis. The record-high hike was widely expected, given that the central bank will be unable to act for the next three months due to the Christmas and summer holidays.

The surged 0.5% after the decision.

The move comes as New Zealand faces its highest inflation rate in 32 years, despite the RBNZ being among the first major central banks to begin tightening policy after the COVID-19 pandemic. The bank has raised interest rates by a total of 400 basis points since August 2021.

The RBNZ said in a release on Wednesday that higher interest rates were necessary in order to bring inflation within its target range in the medium term. It also said that near-term inflation expectations had risen due to stubbornly high food and fuel prices.

The bank said that local demand for goods and services remained robust despite global economic headwinds and was outpacing supply, thus feeding into inflation.

The country’s annual was 7.2% in September, well above the RBNZ’s 1% to 3% target range. The elevated readings are likely to invite more interest rate hikes by the RBNZ, which could potentially weigh on economic activity.

“Because the New Zealand economy is starting from a position of very high inflation and acute labour shortages, a period of economic contraction is likely as economic activity declines from elevated levels,” the RBNZ said in a statement.

“The peak to trough decline in the level of gross domestic product (GDP) is expected to be about 1 percent.”

The bank said that labor shortages were underpinning wage growth, which was also contributing to inflation. It said inflation will remain elevated in the near-term, hitting 7.5% in the next two quarters, and that CPI inflation will only trend towards the bank’s target range by 2025.

Non-tradable inflation, which is affected by the price of goods and services locally produced and consumer in New Zealand, will also remain high over the next two quarters, the RBNZ said.