Rivian Automotive Inc (NASDAQ:) seems to have lost investors’ faith this year. Shares of the Irvine, California-based company are down about 68% this year.

Despite the ongoing broad-based sell-off in growth names—especially the ones with negative earnings—Rivian’s drop is much steeper than the 31% decline in the Global X Autonomous & Electric Vehicles ETF (NASDAQ:) year-to-date. 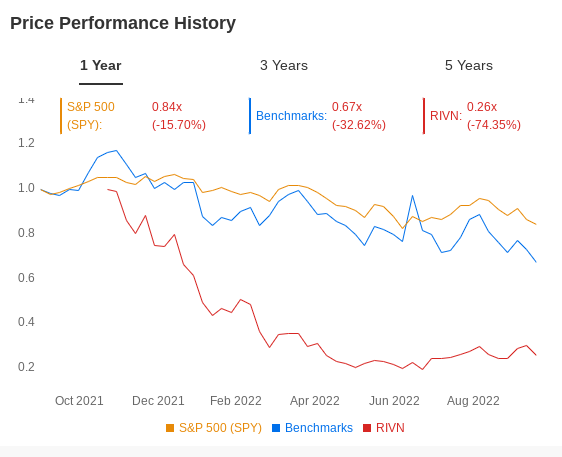 The obvious explanation for this spectacular downfall is that Rivian was simply valued too high in its $13.7 billion blockbuster IPO in November last year. At that time, its stock was traded at 35 times the estimated sales, making it more susceptible to economic headwinds and interest rate hikes.

Another reason investors are bailing on RIVN stock is that its earnings are expected to remain in the red for quite some time, with no clear path to achieving profitability in the short run.

In its latest last month, Rivian cut its adjusted earnings guidance, expecting a full-year loss of $5.45 billion, hurt by the increasing production and material costs. Rivian had previously seen adjusted earnings before interest, taxes, depreciation, and amortization of negative $4.75 billion.

Rivian, which makes the R1T pickup and R1S sport utility vehicle along with electric delivery vans, is struggling to ramp up production at its Normal, Illinois plant.

Recently, the company said it would cut 6% of its workforce as changing market conditions impact its ability to raise capital.

Despite these shocks mostly coming from the worsening macroeconomic conditions, I don’t think the initial bull case for this stock is dead.

Rivian is still the best-positioned startup to compete with Tesla (NASDAQ:) in the rapidly growing EV market. The Irvine, California-based Rivian expects to manufacture 25,000 EVs this year.

Demand for electric vehicles is likely to remain strong, helped by government subsidies to promote clean technologies and consumers’ desire to adopt them.

This month, Mercedes Benz Group AG (ETR:) announced that it plans to jointly build electric vans with Rivian in Europe, a move that could help the former quickly scale up its operations. The two will invest in and operate a new assembly plant at an existing Mercedes facility in central or eastern Europe that will begin production in “a few years,” according to a statement. The companies didn’t release details of the 50-50 joint venture, including investment figures.

Furthermore, most Wall Street analysts polled by Investing.com see Rivian stock as undervalued after this year’s slump. More than 60% of those surveyed rate the stock as Outperform, with their consensus price target showing a nearly 74% upside potential. 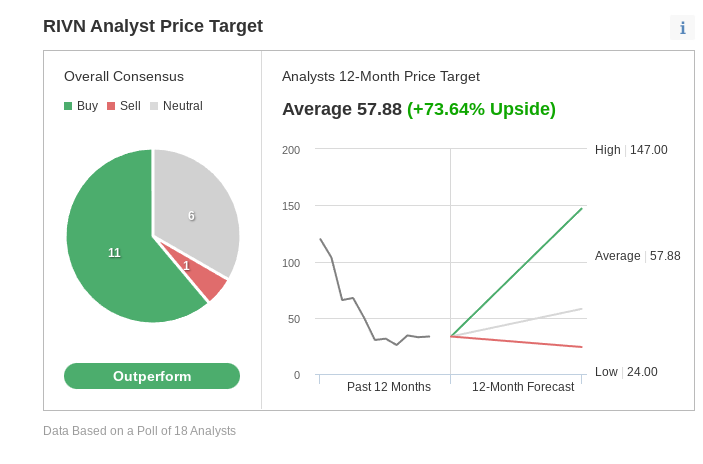 In a recent note, Canaccord Genuity said that Rivian’s relationship with Amazon (NASDAQ:) has not only provided the upstart with capital and an initial order but also afforded the EV maker immediate scale through which it can achieve several cost, manufacturing, and design advantages.

Rivian has differentiated itself by designing most of its hardware and software in-house. That approach, according to Canaccord, should drive product differentiation, enhanced customer service, and strong margins. Rivian has the ingredients to develop into a leader in the EV and mobility marketplace, the note adds.

Amazon, which invested $700 million in RIVN in 2019, plans to purchase 100,000 custom-built electric delivery vans from the company, part of its move to electrify its last-mile fleet by 2040. The kick-start to this project has been underway since the summer, with the first electric vans aiming to deliver packages in a handful of cities, including Seattle, Baltimore, Chicago, and Phoenix.

Despite the recent setbacks, there are solid reasons to believe that Rivian can still be a successful player in the EV market due to its significant lead in the battery-powered pickup truck segment and the backing of the deep-pocketed Amazon. The company’s recent partnership with Mercedes is another evidence of this potential.

However, investors should also note that it will be a long road ahead for the company to scale its production and become profitable. For comparison, Tesla took a decade to scale up and deliver its first full year of profit.

Disclosure: The writer doesn’t own shares of the companies mentioned in this article.