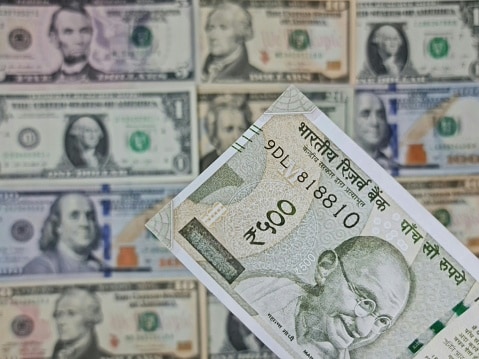 The rupee weakened sharply on Wednesday, snapping a four-day winning streak and down from a one-month high in the previous session, as worries over the country’s worsening external balance were heightened following a record trade deficit.

Bloomberg showed the rupee was last changing hands at 79.1613I per dollar, after opening strongly at 78.6700, compared to a one-month high previous closing of 78.7150.

“The temporary relief we had seen on the back of a pullback in crude prices and a correction in the dollar index is over. We have to take domestic pressures into consideration,” Swati Arora, an economist with HDFC Bank, told Reuters.

Funding the current account will be a challenge and inflationary problems have not yet gone away, making risks skewed towards the downside, Ms Arora added.

PTI reported that the Indian currency plummets 63 paise to close provisionally at 79.16 against the US dollar.

At the interbank foreign exchange market, the local currency opened lower at 78.70 and fell further to settle at the day’s low of 79.21.On Tuesday, the rupee rallied 53 paise — its best single-day gain in over 11 months — to close at an over one-month high of 78.53 against the US dollar.

“Dismal macroeconomic data from India also put downside pressure on the rupee. India services PMI declined to 55.5 in July from 59.2 in June while Composite PMI declined to 56.6 from 58.2 during the same period,” Anuj Choudhary, Research Analyst at Sharekhan by BNP Paribas, told PTI.

India’s provisional July trade deficit widened to $31.02 billion, pushed by a rise in crude oil and coal imports, from $10.63 billion a year earlier, a government official said on Tuesday.

India’s exports dipped, though marginally, for the first time in 17 months in July, while the trade deficit tripled to a record, fuelled by over a 70 per cent rise in crude oil imports.

“There have been concerns over the current account deficit rising sharply and the latest trade numbers add to the worry. With the Reserve Bank of India’s (RBI) monetary policy on Friday, we can see some reversal of the recent rally in the rupee,” a senior trader with a foreign bank, told Reuters.

Disappointing macroeconomic data from India may continue to mount downside pressure on the rupee. However, weak crude oil prices and inflows from foreign investors may cushion the downside.

The dollar edged lower on Wednesday but held on to most of the previous day’s gains, its biggest surge for weeks, leaping on Federal Reserve officials’ hints at aggressive rate hikes and drawing support amid a US-China flare-up over Taiwan.

The dollar index, which tracks the greenback against six major peers, has softened from a two-decade high in mid-July as investors reined in expectations of Fed rate hikes.

But on Tuesday, a trio of Fed members gave the impression that the institution is still “fully united” in its decision to raise rates to a level that will start to dent the greatest US inflation since the 1980s. As a result, the dollar index rose by 0.8 per cent on that day.

Traders may also remain cautious ahead of the Reserve Bank of India (RBI) monetary policy outcome towards the end of the week.

No one wants to make big bets ahead of the Reserve Bank of India’s monetary policy decision on Friday either as it is unclear what the size of the interest rate hike will be, a trader at a private bank, told Reuters.

Although a rate increase by the RBI on Friday is a given, a Reuters survey found that expectations for the amount were evenly divided between 25 basis points (bps) and 50 bps.

“We would recommend buying in this rally as the pair could see a quick reversal if the next U.S. inflation print shows no signs of easing or the U.S. labour market data remains strong – re-fueling large rate hike bets by the Fed,” economists at HDFC Bank wrote in a note.

If the RBI does not hike rates as quickly as the Fed, the interest rate spread between the US and India would expand, which will lead to a greater outflow of foreign investment from the nation.