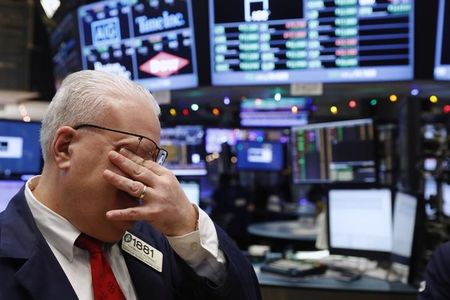 Investing.com — The Dow closed sharply lower on the week and briefly fell into bear-market territory Friday as investors fret about the potential of a deeper and darker recession amid growing worries that the Federal Reserve will overshoot on rate hikes.

The fell 1.6%, or 486 points, and fell into bear-market territory intraday as losses exceeded 20% from the January peak. The fell 1.7% to close at its lowest level since June. The slipped 1.8%.

Energy slumped 6%, pressured by a surge in the dollar and worries that a deeper global recession will hurt energy demand.

Fears of a recession have intensified this week after the Federal Reserve chairman Jerome Powell signaled that the central bank would remain on-mission to curb inflation at the expense of economic growth. The Fed pushed its rate hike forecast to 4.4% for 2022, up from 3.4% previously, signaling further jumbo-sized hikes ahead.

With the Fed hiking rates into a slowing economy in which is still well above trend, Morgan Stanley warned that weakness in economic activity will be more broadly spread. The bank cut its U.S. growth forecast to 0% in 2022 from 0.2% previously and its 2023 forecast to 0.5% from 1.3% previously.

The Dow was also dragged lower by a more than 5% plunge in Boeing (NYSE:) after the aerospace company said it had reached a $200 million settlement on charges it misled investors about the 737 Max crashes.

Consumer stocks, which are also acutely vulnerable to slowing economic growth, fell more than 2% as investors priced in softer consumer spending. Amazon (NASDAQ:) slipped more than 3%, while travel and leisure stocks deepened their losses for the week, with cruise line and casino stocks coming under heavy pressure.

FedEx (NYSE:), meanwhile, fell more than 3% as Wall Street cast doubt on whether the shipping giant’s cost-saving measures will be enough to offset falling shipping volumes and higher inflation. The company released fiscal that fell short of estimates, but announced plans to ramp up shipping rates and generate total cost savings of $2.2 billion to $2.7 billion.

The “cost saving numbers, while impressive on a headline basis, is likely not nearly enough in the context of high inflation and declining volumes,” Deutsche Bank said in a note.